The nice thing about writing a blog, is that I get to choose what I want to write about.  And you, the reader, can decide whether the topic interests you.  Today, I’m writing about my obsessive love affair.  Yes, my love affair with golf!  Were you thinking something differently?  I am an avid golfer.  Now don’t confuse avid with good.  I am not a good golfer.  I am unfortunately a mediocre golfer, a 15 handicapper to be precise.

The greatest flaw in my game

If you asked the guys I regularly play golf with, “What is Doug’s greatest flaw in his game?” it wouldn’t take them three nanoseconds to identify my Achilles heel.  They’d say my putting, especially short putts under six feet, which varies from one day to the next from so-so to really awful, depending on the mood of the golf gods.

One of the unintended consequences of the COVID-19 pandemic is that the golf course I play regularly, Quail Valley Golf Course, has never been so busy.  And since my business has come to a roaring halt, I’ve had ample opportunities to indulge in my favorite pastime.

Even before the pandemic caused everything to come to a roaring halt, I had committed to 2020 being the year I significantly improved my putting skills.

Improving the mental approach to golf

In January I purchased the book, Golf is Not a Game of Perfect by Dr. Bob Rotella.  Dr. Rotella is a well-known sports psychologists who has helped some of the greatest players on the PGA tour with their mental approach to the game of golf.  Here are some of his tips on creating a pre-shot routine for putting:

I bought his book as an Audible book, so while I’m driving to the golf course, I listen to his tips on creating the right mental approach to golf before I even step onto the course.

I’ve also made changes to my putting grip and my putting stance.  When it comes to putting, there is no right or wrong way to grip a putter.  The same is true for how you stand over a putt.  Putting is the most free thinking of any part of the game.  To remove any wrist action from my putting stroke I now grip the putter with my right hand as far down the shaft as possible while I leave my left hand where traditionally most golfers hold the club.  So instead of my two hands overlapping one another they are separated by a couple of inches.  Yes I know.  I look like an 8 year old gripping a club for the first time, but I don’t care.  It makes for a much more solid feel on the club.

And for the past 50 years I’ve putted with an open stance.  But I’ve decided to square up my stance because it makes it much easier to know if my backswing and follow through are actually going straight back and straight forward.  When you have an open stance how would you know?

The golf statistics I track

For those who know me best, they will tell you I am a numbers guy.  I love analyzing everything.  When it comes to golf, there are so many stats that you could keep track of.  To record those stats most important to me I created my own scorecard which has slowly evolved over time.  Here is the latest version of my scorecard. 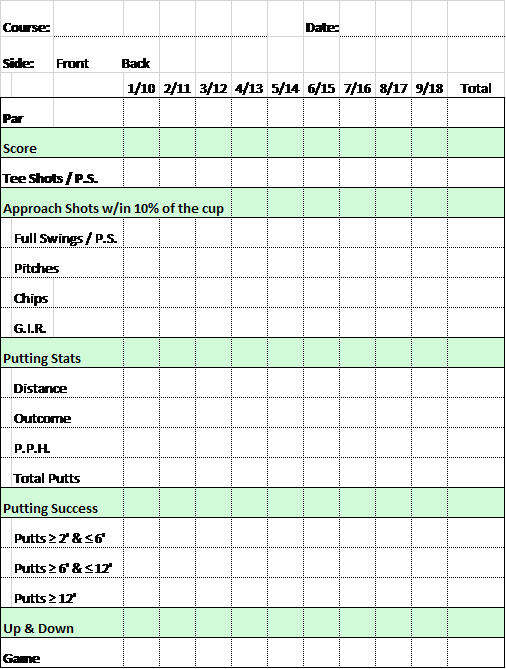 I know what you’re thinking. You’re rolling your eyes and thinking this guy is really seriously weird. Even the golfers reading this article are thinking that. That’s okay. I’ve gotten used to the disparaging comments (you know, “sticks and stones may break my bones…”). Notice about half my scorecard records putting stats because as any golfer will tell you the old saying, “Drive for show, putt for dough” is very true.

I’ve made two changes to my putting stats this year. For years I recorded lag putts within 2 feet of the hole. It’s not a bad stat but I realized that I was consistently leaving my putts short and as we all know, “Never up, never in.” So this year I’ve changed this putting stat to Putts Past Hole. My goal now is to consistently putt every putt past the hole. It’s a more aggressive approach to putting, and yes, occasionally I will pay for this aggressiveness by my ball blowing past the hole resulting in a 3 putt. But my formerly tentative attitude about putting has been replaced with more of killer instinct. I like this change in attitude.

Also notice that I’m now tracking my putting success. All putts from 2 feet or more are divided into one of three distance categories. My goal is to make 80% of the putts that are two to six feet from the hole. I know that would be a substantial improvement in my putting but unfortunately I don’t know what my success rate at this distance was prior to recording this stat but I assure you it wasn’t close to 80%.

So how am I doing since I implemented all these changes? See below. 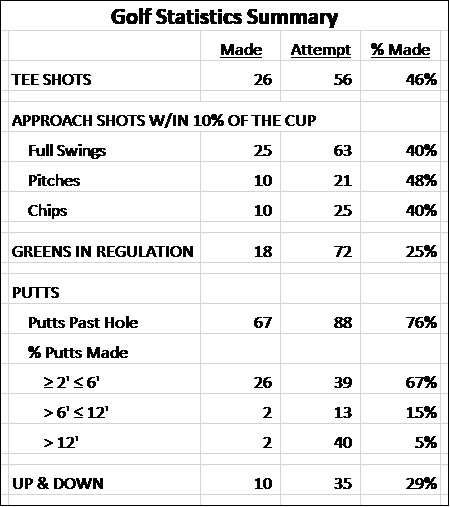 Give me six months and I’ll know if these changes have improved my putting prowess.  So now you know what I obsess over.  What putting tips can you give me?  Any and all comments will be appreciated.  And if anyone would like to get together to play a round just give me a call at (503) 705-4723.

Doug Marshall is the award winning author of Mastering the Art of Commercial Real Estate Investing.  Check it out on Amazon!

I met Doug a few days ago, what a pleasure to play with. We got naturally paired up when we got stuck behind a few slow groups. Golf chatter, courses played, shots you’d like back, and of course he introduced me to his stat keeping. At first glance you think “what, why?” Then a few holes more you think, ok… Knowledge is power. Like mosts golfers I’d keep the standard putts, GIR, and FIR’s . With my game plateaued, why keep doing the same! What good is knowing if I hit the green in regulation 35% of the time and still two putt from 10 feet… To only post another bogie or worst. Like most weekend warriors I’ve hovered in the 13-17 index range, hit balls on the range dozen of times a week, contemplated new clubs, and watched countless how to videos. After seeing Doug’s stats, and him talking about is practice routine. It kinda clicked, though just starting. I’m excited and can truly envision improvement someday. I’ve already ordered my little book from the print shop and excited to get it next week. Thanks for sharing the spread sheet, the great conversation, knowledge, and just being a pleasure to play with. Look forward to my new knowledge and seeing improvement. As well as getting out with you again in the near future. Cheers!

Hi Doug. I appreciated the opening comment about what you get to write and what I get to read. Since I have NO interest in golf, I only read a little, but I am sad you have not been able to play.